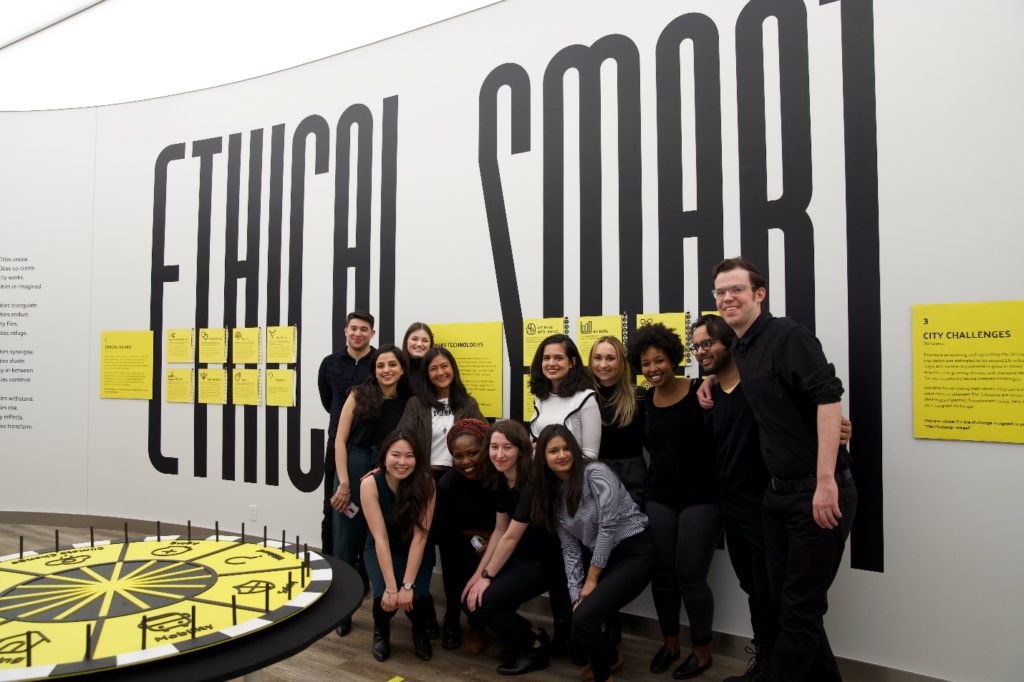 A new initiative being created by graduate design students could help Canadian municipalities determine the best ways to advance smart city initiatives that focus on humancentric design. Thirteen students with the George Brown College Institute without Boundaries (IwB), an interdisciplinary design strategy program, have spent the past ten months studying the make-up of smart cities and developing a framework and guidebook to assist cities and towns in making informed decisions about the kinds of smart city initiatives they wish to pursue. For this project, ethical smart cities refer to technological advancements that correspond to local needs and values. The framework and guidebook, referred to as the Ethical Smart Cities Playbook, will be hosted on a new website to be launched at an online event at 4:00 p.m. on Friday, May 29. “Through our research, we realized that many parties who are thinking of becoming smart cities—or even better: ethical smart cities—needed a starting point and needed a guide,” IwB interdisciplinary design strategy student and project team member Eirene Keh told NRU. “We’ve developed a framework to help guide municipalities through that process. It’s a five step process, and we’ve also developed tools [that further refine the process]. So the outputs of this project really [are] a publication, a website, as well as that launch on the 29th.” Keh says that the project team worked with the City of Hamilton, the City of Markham, the City of Stratford, and the City of Kelowna to conduct research on what smart city projects municipalities were already working on and how they were approaching them. The framework and the playbook developed by the ethical smart cities team do not define the values or needs of municipalities, but rather lay out a five-step process for municipalities to determine what best suits their local communities. Projects begin by defining an “ethical baseline” for a city—defining what an ethical smart city looks like for that community and what the most important issues for residents are. Specific local needs are then identified, and goals are set for achieving those needs. Specific smart city solutions geared to local needs are then designed and developed, and finally, implemented. The George Brown graduate design team developed 20 specific tools to further refine the concept of ethical smart cities and to help guide municipalities through the process.

“The playbook is going to be available to municipal leaders and their staff so that they can work through these things,” Intelligent Community Forum chairman and co-founder and IwB smart cities expert in residence John Jung told NRU. “But there’s also going to be a website… they’ll be freely able to [access]… in order for these communities to go through the steps and [identify] the things that they may need.” Jung says that although the framework can be used by any municipality, it is intended especially to be used by smaller cities and towns that have limited resources to be able to do a lot of research in this field themselves.

Smart cities are widely viewed as entailing technological improvements—usually involving digital technology—made to urban areas to improve the operations of important systems. The term is very broad and can include anything from data-collecting sensors to the provision of public internet to controlling plant watering. However, as the concept of smart cities comes closer to becoming a reality, there are widespread public concerns around the application of certain technologies, especially pertaining to surveillance, and the potential consequences of integrating technological systems into public spaces for their own sake, rather than to address a specific community need. These concerns have led experts to identify the need for smart cities designed for specifically for residents and local needs, which Jung says is the basis for an ethical smart city.

“‘Ethical smart cities’ really looks at a community from the point of view of its values, and how those values are translated into things like urban planning and development, to the operations, everything they do,” says Jung. “It starts at the beginning with understanding the values that our community wishes to pursue… you take those ideas and then translate them into your own situation based on your community values.”

Projects such as this are valuable for improving the conversations around smart cities and the ways they can be built out, Council of Canadian Innovators chair, Centre for International Governance Innovation chair, and former BlackBerry co-CEO Jim Balsillie told NRU. He says that citizen engagement is a critical component of designing smart cities that serve local interests, but that most “Smart cities, if they’re to happen, they’re supposed to be mediated between citizens and their government… it’s to provide something that [citizens] think they want,” says Balsillie. “That’s extremely important in a world where too many people are looking for tech solutionism, which is a mistake, or where big tech is trying to come with what people call post-political approaches, where they do a deal and then, tech drives it on the people.”

Balsillie was a major critic of the recently-cancelled Quayside smart city project being advanced by Google subsidiary Sidewalk Labs, and says the experience the City of Toronto had with that project should serve both as a learning experience about how to design smart cities, and as a warning of what can happen if critical decisions are left in the hands of private technology companies looking to increase profit rather than serve public interests. He adds that it also highlights the need for the involvement of government agencies and staff members who are experts in how a specific technology being proposed works and how it would affect communities and individuals to be involved in such projects.

“What was done [with Sidewalk] was a rogue, unaccountable agency in Waterfront Toronto that did a secret deal with a vendor without involving citizens, and it gave the vendor responsibility to design the governance and manage the consultation,” says Balsillie. “They did the opposite of what’s considered a responsible and professional way about it. Waterfront Toronto has no IP or data expertise. There are no governmental responsibilities to determine rules and regulations to handle this, and people were just way over their heads and naive and thinking that a vendor will do it in a way that looks after citizens.”

Digital Public co-founder and principal and Centre for International Governance Innovation senior fellow Bianca Wylie told NRU that she supports the ethical smart cities project as a way to help bring more decision-making ability to local governments. Wylie was another highly prominent critic of the Quayside project, and she says the way that project was unfolding demonstrates a lack of good public governance around smart city issues. She says she is especially concerned about data privacy, especially as it relates to the way information is managed in a smart city context. She says that while most data issues have been around individual privacy, there has been little discussion and even less regulation on how larger aggregate data sets are managed.

“We don’t have a proper legal construct for the idea of privacy as a public good,” says Wylie. “You can’t turn the city into a consumer good, where you decide if you like [a particular technology] or not, and you decide if you can deal with the risk it might bring to be sharing information or to being discriminated against.”

Wylie says that she believes the best way to assess smart city projects in the future would be to create an in-depth assessment process similar to an environmental assessment which would allow a municipality or other level of government to consider all the possible ways in which a particular technology or larger project like Quayside would affect both area residents and the city and country overall. She says she thinks the federal government should be taking the lead on issues like this as it looks to make large investments in public infrastructure, but that local governments should be able to make the actual decisions about which projects will impact their communities and how.

“When you talk about a technology, it’s a very contextual conversation, as is data. It’s always in an ecosystem of people,” says Wylie. “At the local level, where our government services really are, that’s where it gets real. [They] know who needs money, [they] know who’s getting money, [they] know what the barriers are, and where the problems [are]… You have to talk to your local actors. I think there’s a real interplay there where the funding responsibility is federal and potentially provincial, but the execution on the governance should be strongly local. There should be an ability for it to be adjusted for a local and even a neighbourhood level.”